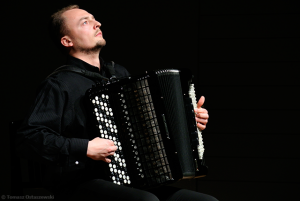 With his knowledge and skills learned at at the master classes, during which he worked under the guidance of educators like Prof. Wlodzimierz Lech Puchnowski (Poland), Alexander Dmitriev (Russia), Alexander Selivanov (Russia), Yuri Shishkin (Russia), Claudio Jacomucci (Italy), Teodoro Anzellotti (Italy) and Alfred Melichar (Austria).

Mr. Ostaszewski is the winner of many prestigious accordion competitions.  Among his competition successes, the most important awards can be mentioned here:

Tomasz has performed solo, chamber music and with orchestras throughout the country of Poland and abroad, in the United States, Japan, China, Germany, Italy, Spain, Greece, Croatia, Hungary, Ukraine and Lithuania. He has made recordings for the American, Polish and Lithuanian radio and television.

In 2011, Mr. Ostaszewski has received a scholarship from the Ministry of Culture and National Heritage “Young Poland” to purchase an accordion concert high quality and scholarship Pro Polonia Dongsan Research Foundation for outstanding artistic achievements.

“Tomasz Ostaszewski is one of the most outstanding musicians of the young generation.”

“…There must be something in the water in Poland that produces such virtuosos of the accordion (I heard many of them, both here and in Poland), and Tomasz is a virtuoso of a high class. It was an excellent performance.”
– Jeffrey James, composer, music critic. /fragment review of the concert at the Carnegie Hall/